“It all started with the classical guitar”, says Shiro Arai, Chairman and the founder of Aria Guitars.
One day, a friend came to visit Shiro’s apartment with a guitar. Shiro was expecting to hear Koga-type Japanese po
pular music, but instead his friend started to play a piece by Bach. From this moment, he had been inspired by the sound o 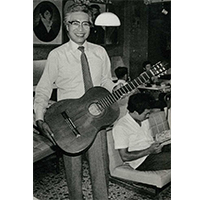 The very next day, Shiro bought his first guitar, costing over two months salary and began to teach himself to play. Now playing day and night, his passion for the guitar brought him to a famous classical guitar master in Nagoya, and soon became one of his students.

Shiro started work for a trading company in 1947, aged 17. In 1953, Shiro and two of his colleagues resigned their positions and founded their own trading firm. After the fledgling company failed after just one year Shiro found himself homeless with nothing but his guitar. In order to live and settle the outstanding debts from this first business he started to teach the guitar.

In 1954 unable to buy guitars, music and strings in Japan’s music stores, Shiro started to import classical guitars, Augustine guitar strings, and musical scores for himself and his students. These were the first classical guitars imported into post-war Japan and included instruments from renowned makers Jose Ramirez and Hermann Hauser. Recognising an incre

asing demand for guitars from friends and players throughout Japan, Shiro grasped the opportunity to start his own business. On August 2nd, 1956, ARAI & CO., INC was founded.

At this time, although demand for classical guitars and accessories were increasing, it was still comparatively low and business was supplemented with other products including woollen material.

The name, “ARIA”, which means expressive melody, was first used in 1958 when Arai exported Japanese built classical guitars fitted with steel strings to South East Asia in 1963. Also the letters of his name “ARAI” were just switched around to “ARIA as he recalled. 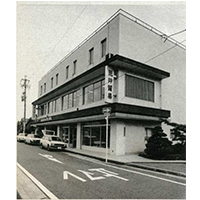 Shiro embarked on a tour of the US with two of the best Japanese KOHNO guitars. At that time Japanese guitars had a poor reputation for developing body cracks and warped necks after being exposed to drier conditions abroad. It was Shiro’s intention to prove how good Japanese guitars were by performing and showing to fellow guitarists, teachers and music shops. After two months these guitars also started to crack.

Even the best available Kohno guitars faced the same problem. Shiro took these cracked guitars back to Japan to show their makers just how vital it is to use properly seasoned tone woods. This trip gave Shiro the experience and knowledge to improve the quality of guitars and export Japanese guitars worldwide.

It was as early as the late 50’s when Arai started to import Fender guitars and amplifiers from the US, although at that time the Japanese market was not quite ready for the electric guitar! With the advent of rock n’ roll demand for electric guitars took-off. Arai released its first ARIA brand electric guitars in early 60s and soon after started to export to the US followed with models including the 1532T and 1802T.

To counter the decline of the solid body electric guitar boom, Arai released the Aria Diamond series hollow body semi-acoustic guitars. Aria Diamond was named after the imitation diamond inlayed into the headstock. This series lead to the release of the 1202 models in 1966 and caused nothing short of a sensation in Japan. From 1967 Aria added a variety of models including the solid body 1702T, R-320, and violin shaped 12-string and bass guitars, and a full acoustic guitar.

PE (Prototype Line) is a classic Aria design, also known as the legendary masterpiece, it featured an arched top, and all maple carved body with Aria’s original “heel-less neck and DiMarzio Super Distortion Humbucking Pickups. Primarily designed for tone and playability, the PE series has been modified to match today’s trends while keeping its original features and timeless design.

In 1978, Aria Pro II released another long-selling model, the SB-1000. The SB-1000 was highly regarded throughout the world and came to represent everything that was good about Aria and Japanese guitar building. Featuring a Canadian Ash body with neck through body and, to enhance playability, a heel-less neck. For its original tone, SB featured the Aria original BB circuit. Its exotic see-through finish and the eye position marks make the SB amongst the most distinctive basses ever made.

Aria Pro II led the way with the 80’s shift to Hard Rock and Heavy Metal. Releasing many models such as XX, ZZ and U-1. Whilst not abandoning their routes also re-established the semi-acoustic guitar models, FA and TA. The 80s, also saw the introduction of the famous IGB (SB INTEGRA) bass series.

In the early 1990s, after the heavy metal rush, Aria Pro II released one of its favourite original models, the MA series to reinforce the PE and SB line-ups. MA series bodies are constructed with innovative crystal shaped carved top and back.

Aria has been at the forefront of guitar and Japanese guitar building excellence for 60 years, which means a wealth of experience and acquired expertise. The core value remains the same today, to constantly strive to achieve a higher level of excellence, quality and value for musicians.